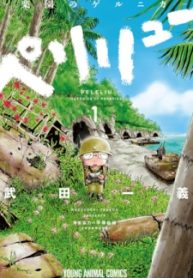 N/A, it has 0 monthly views

Peleliu – Rakuen no Guernica follows the daily lives of Japanese soldiers taking part in the Battle of Peleliu during World War II: a high-casualty, months-long campaign. The main character, Tamaru, dreams of returning home to become a mangaka, and sees their island outpost as a wild paradise that can one day be used as a setting for one of his stories. Most of his comrades, however, are prepared for the more realistic scenario — that they will not be leaving Peleliu alive.